Why the Thailand Cave Rescue Is So Difficult

Thai rescue teams arranging a water-pumping system at the entrance to a flooded cave complex where 12 boys and their soccer coach have been trapped in Chiang Rai, Thailand. Royal Thai Navy, via Associated Press

Rescue operations are reaching their climax at the Tham Luang Cave complex in northern Thailand, where divers are pulling the trapped Wild Boars soccer team to safety. The 12 young team members and their coach, from Chiang Rai province, had been trapped in the flooded cave complex since June 23.

Narrow passageways, near-zero visibility and the constant threat of a monsoon have made the rescue operation incredibly difficult. Saman Gunan, 38, a former member of the Thai Navy SEALs, died after he lost consciousness while placing spare air tanks along the route to the cavern where the boys are trapped.

How does one guide a dozen children through miles of subterranean passageways, including lengthy underwater channels, largely in the dark, when many of them can’t swim? John Ismay, a New York Times reporter who served as a diving officer in the United States Navy from 2003 to 2010 and was qualified in deep-sea diving and salvage operations, explains how a rescue mission could be pulled off.

Just how hard is this rescue?

Very tough. Every part of this operation presents its own difficulties. The rescuers are swimming through underwater passages, then surfacing and walking to the next flooded section and diving again. They have to repeat that process, and do so with children — many of whom reportedly cannot swim. Everything here will be a trade-off between traditional safety considerations and operational necessity. The conditions unique to this problem will dictate all of the decisions made at the site.

How is cave diving different from diving in an ocean or a lake?

In a cave, you have no free access to the surface, meaning if you have an emergency underwater, you can’t just dump your gear and bolt to the surface to get air. You have to get through the cave first. Your gear could get snagged or caught while you’re in a narrow passageway, and you might be unable to fix that problem by yourself. The more gear you bring with you, the more opportunities there are for something to get hung up on an outcropping of rock. I imagine these divers are stripping down their gear to the absolute essentials for exactly this reason.

Cave divers often wear their compressed air tanks on the side of their body instead of on their backs. It’s easier to reach something under your armpit than it is to reach for something behind you.

Will the divers be able to see underwater as they make their way out?

I wouldn’t count on it. Any dirt in the cave will make the water murky, especially as divers pass through it. It doesn’t take much agitation to stir that dirt up to the point where you won’t be able to see your hand in front of your face, even with a flashlight. The professional divers will be used to low visibility and lowlight conditions like that underwater. The children probably won’t be.

Thai and foreign divers have rigged a static rope line through the underwater portions to guide their way. The adults and the children could pull themselves along such a line, which makes navigation easier and reduces the chances of anyone getting lost underwater. Much of the journey would be made by feel, pulling themselves along bit by bit. 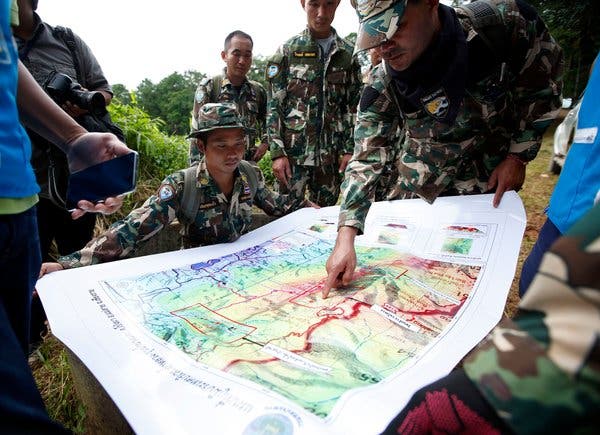 Do United States military divers train in caves like this?

I’ve never heard of any military unit doing a cave dive in training. The risks are enormous and the benefits probably do not justify it. The closest thing in the Navy dive manual is what’s called “enclosed space” diving, which includes diving in shipwrecks or inside the ballast tanks of submarines.

For safety reasons, the Navy doesn’t allow divers to use scuba gear for those operations. Instead, it requires divers entering enclosed spaces to use one of two methods, both of which involve a compressor pumping air through an umbilical line to a diver wearing a full-face mask or a helmet that protect the entire head. Divers typically wears a compressed-air cylinder on their back as a backup source of air in case the umbilical line fails.

It might be possible to connect enough umbilical line to go the entire distance, from the cave entrance to where the children are, but pushing air through miles of hose would require strong compressors.

Using scuba gear, as the Thai divers apparently are, is riskier but is most likely the only choice available given the circumstances. There could be openings that are too small for a dive helmet, or it could be impossible to rig enough umbilical line from the outside of the cave to where the children are.

How can children who have never dived before dive now?

The answer is that you make it as simple as possible for them. A full-face mask, as the children are reportedly using, does that. Typical scuba divers will wear a mask (like big swim goggles) that covers their eyes and will breathe through a separate regulator that’s connected to their air tanks through a rubber hose.

A full-face mask combines those two into one, and adds the possibility of having through-water communications. That would make a lot of sense because the adult divers could talk the children through the dive as they go, checking in and making sure they’re O.K.

Do they have to worry about getting “the bends”?

“The bends,” or decompression sickness, is a medical condition brought about by nitrogen bubbles in a person’s bloodstream. It’s a function of how much time you spend at a given depth, and whether you ascend slowly enough for the nitrogen in your blood to be naturally expelled through your lungs.

The water in the caves doesn’t seem to be deep enough for decompression sickness to be much of a worry here.

What is the United States military doing to help?

A Defense Department official I spoke with said that at the request of the Thai government there were about 30 American military personnel on site, mostly pararescuers from Kadena Air Base in Okinawa, Japan. The official said that none of the American service members were diving in the cave.

Air Force pararescuers are among the best combat medics in the military and are all qualified divers. It’s not clear what their role is at the cave entrance, as the children who have been rescued so far have all been taken to local hospitals.