Fashion was a defiant statement of purpose for Nancy Pelosi, new women in Congress 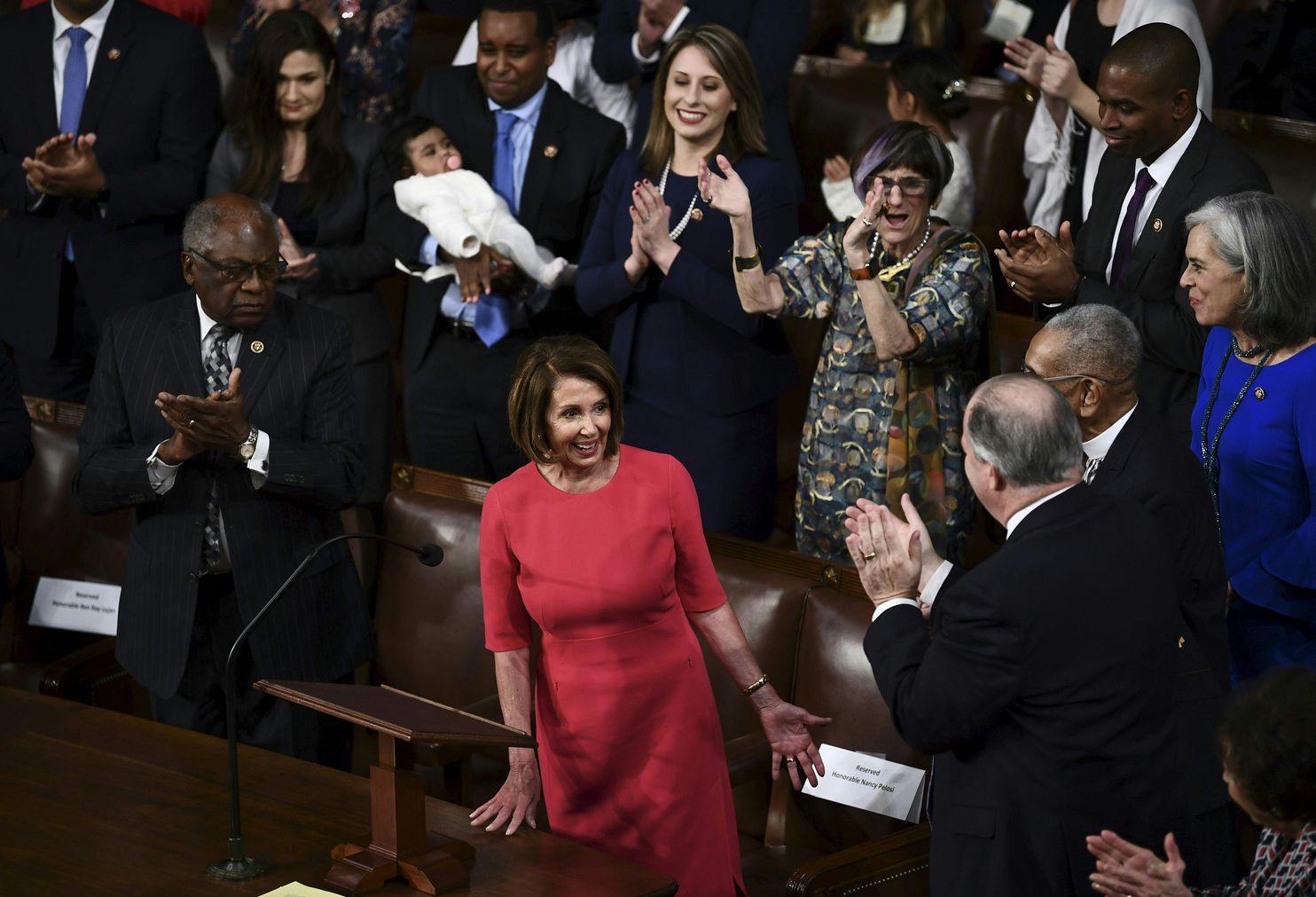 At the start of the 116th Congress, fashion was not merely a footnote, it was a rallying cry, a defiant gesture, a point of cultural pride — a glorious, theatrical declaration of self. It was white suits and pink dresses, Native American artistry, a Palestinian thobe, a kente cloth stole, a hijab and a skintight pencil skirt with a fur stole.

The main news story from Capitol Hill was, of course, the phoenixlike rise of Rep. Nancy Pelosi (D-Calif). But even before she was sworn in as Speaker of the House, it was impossible to miss her as the television cameras swooped high and low over the sea of dark suits on the House floor. Alas, despite an influx of women — a record 102 in the House — men still dominate, and those men continue to favor a palette of navy, charcoal and black. Pelosi’s bright fuchsia dress was like the plumage of a brazen bird, one with the audacity not just to fly with the flock but to lead it.

It was the aesthetic opposite of what she’d worn only the day before, when she went striding through the halls of the Capitol in a discreet suit the color of cement. This was an entirely different ensemble for a momentous day — one not just for the cameras, but for the history books. 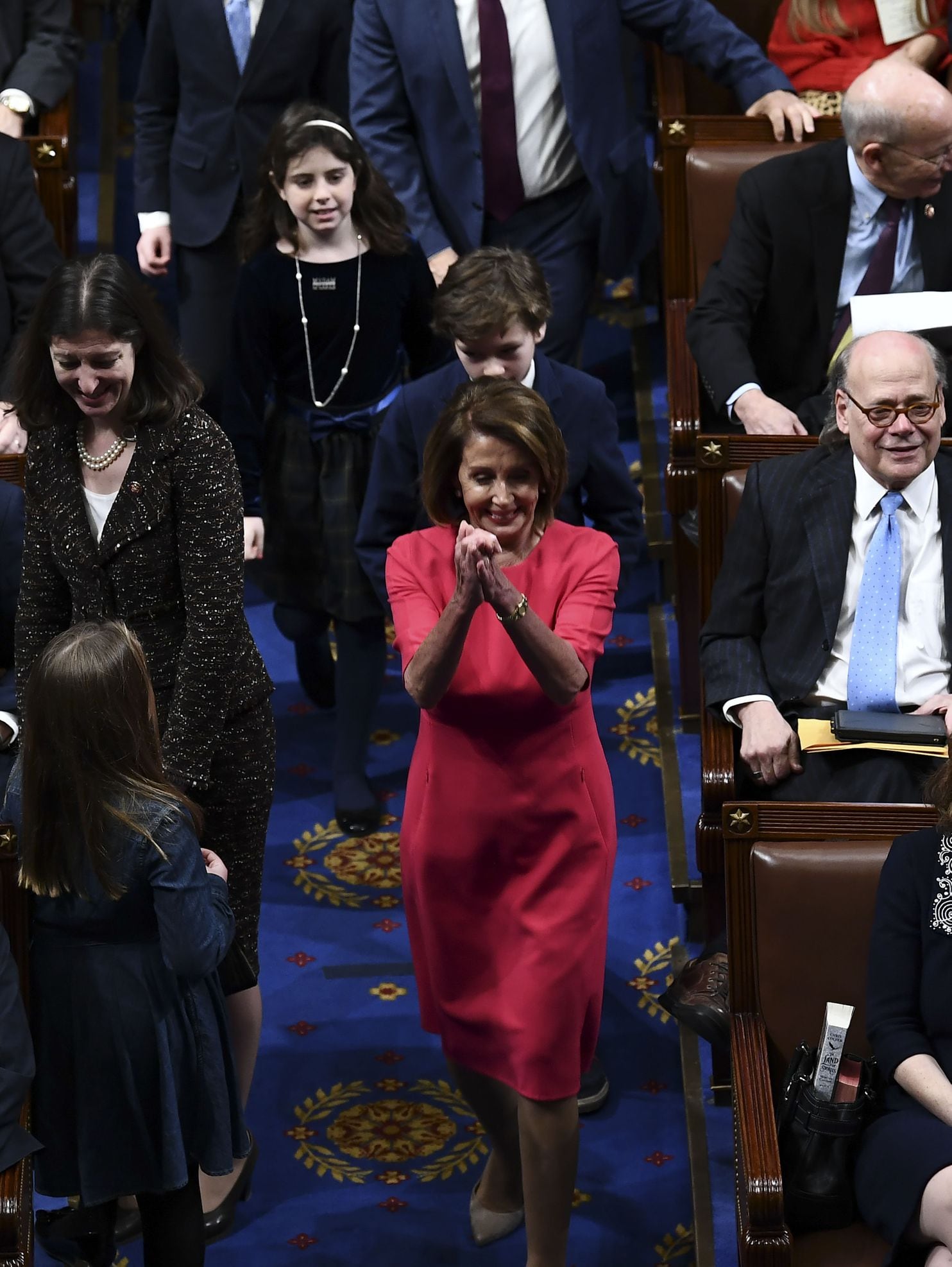 Pelosi and her flock. (Brendan Smialowski/AFP/Getty Images)If there is any color that has ever come close to defining a gender, it’s pink. Culturally, it has long been assigned to girls. And for generations of women who were stereotyped and bullied into polite smiles and reassuring deference, pink was their bane. Over time, pink ribbons came to symbolize serious women’s issues — although typically discussed in soft and fuzzy tones.

But this is the era of pink pussy hats. The color has been reclaimed and redefined. It is not about patience and calm or the kumbaya balm of we-are-all-equal. The new pink is aglow with outrage and the insistent demand that past wrongs be rectified.

Pelosi was dressed to take on the leadership role in the boldest, brightest, I-am-here shade of pink. In a November CNN interview, Pelosi noted that no one is indispensable, “but some of us are just better at our jobs than others.” That wasn’t overconfident swagger. It was honest. But it was the kind of honesty that women mostly don’t offer up about themselves, because that’s not what little girls in powder pink were taught to do. They were taught to whisper with humility.

[Elizabeth Warren is sending you a subliminal message with her sleeves]

These women of the new Congress, some of them, actually a lot of them, did not shy away from using fashion as a tool, from taking that quintessentially female pastime — the one derided for being frivolous — and turning it to their advantage. They used their attire to lure the cameras, to start tongues wagging and to make viewers reconsider their preconceptions about how Americans are defined, who has the right to lead and, ultimately, what power looks like. 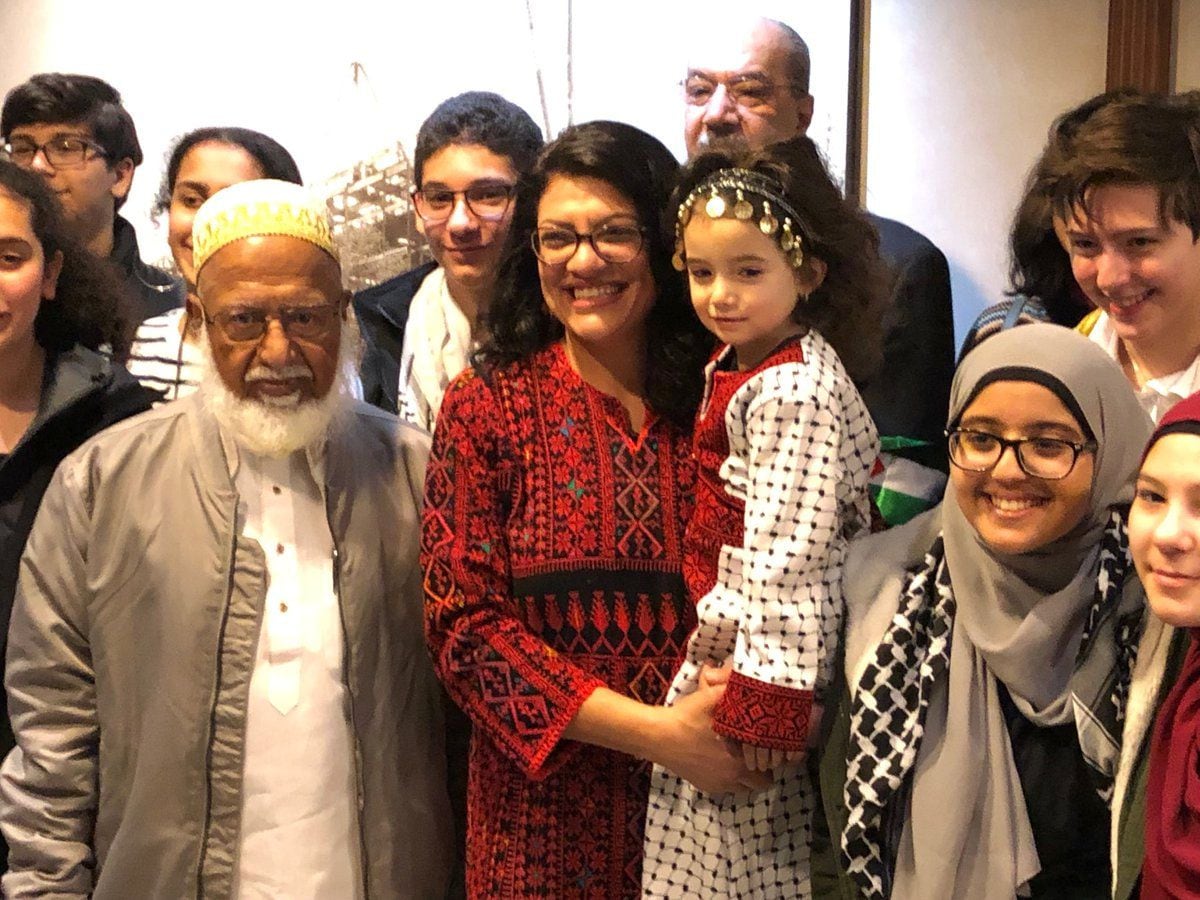 Congresswoman Rashida Tlaib (D-Mich.), the first Palestinian-American elected to the House, wears a traditional Palestinian gown. (Social Media/Reuters)Rep. Rashida Tlaib (D-Mich.) wore a Palestinian thobe in honor of her mother. Tlaib, who is the first Palestinian American elected to Congress, recalled in an essay for Elle that as a child, she would watch as her mother sat on the floor stitching and embroidering the gowns with a lamp at her side. The decision was a statement about Tlaib’s background and a future in which it can be as welcomed in the United States as Western European roots are. Similarly, Rep. Debra Haaland (D-N.M.) expressed her Native American heritage in turquoise jewelry and immaculate embroidery while also underscoring one of her campaign promises, which was to focus attention on missing and murdered Native American women. African American congresswoman Barbara Lee (D-Calif.) had a kente cloth wrap draped around her shoulders. Each of them used fashion to press the point that diversity is essential to the power dynamic. 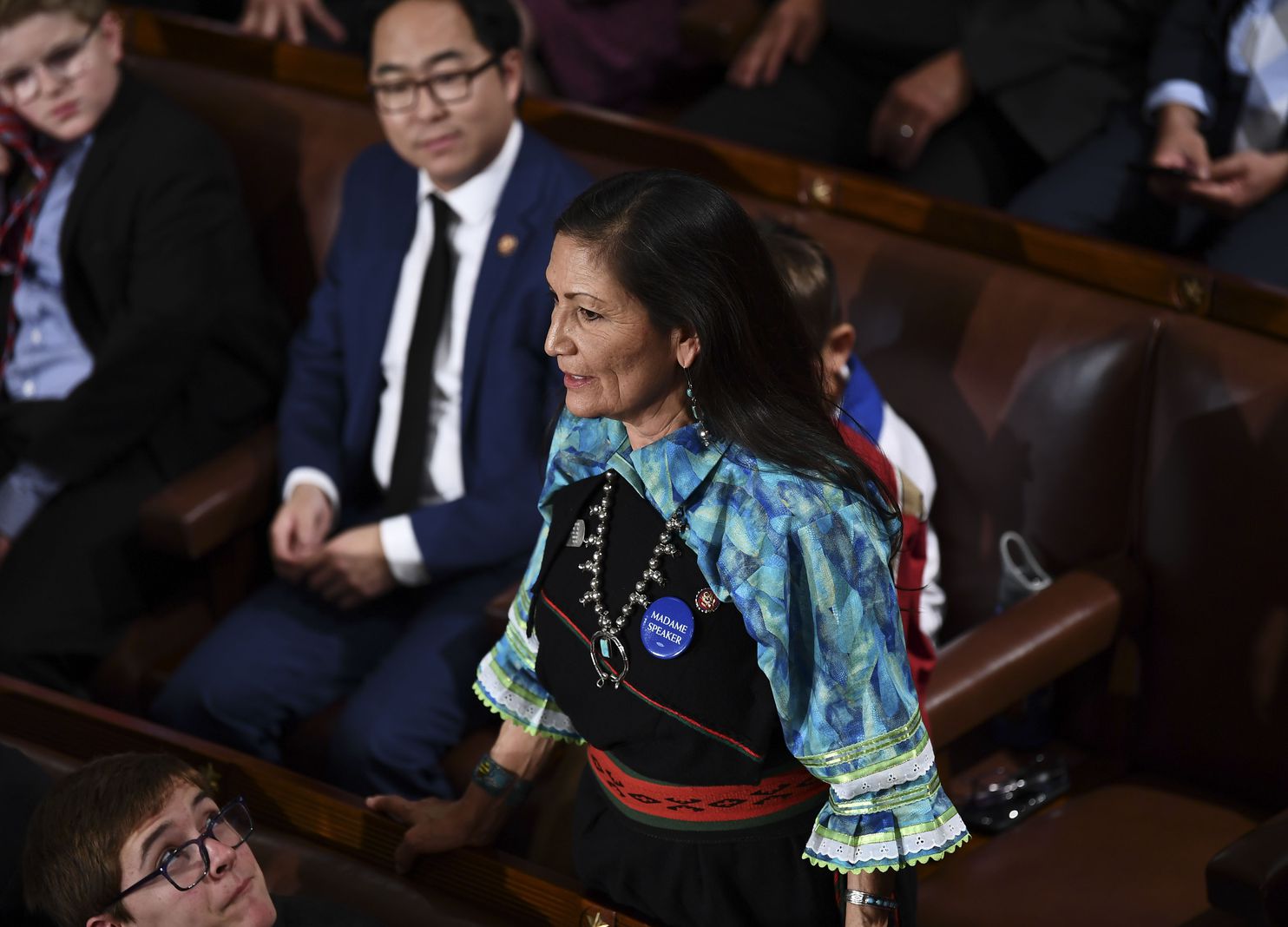 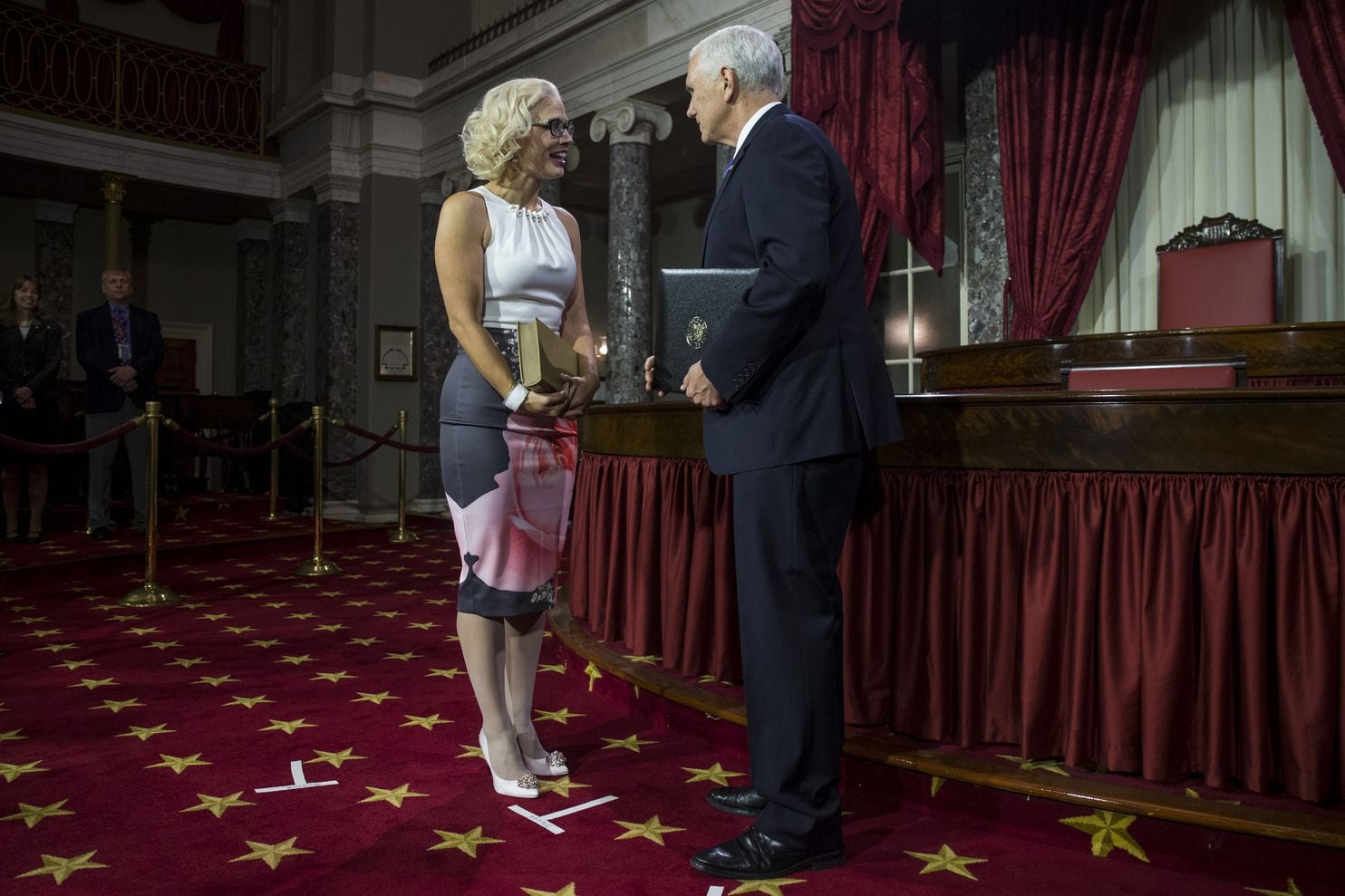 Sen. Kyrsten Sinema (D-Ariz.) participates in a mock swearing-in ceremony with Vice President Pence, for which she removed her fur stole. (Zach Gibson/Getty Images)There’s also power in the truth. And sometimes that truth is best delivered in platinum Hollywood curls and a pin-tucked blouse. Sen. Kyrsten Sinema (D-Ariz.) paired her red-carpet hairdo with a form-fitting floral pencil skirt and a dove-gray fur stole for her swearing-in. The ensemble was frothy and lighthearted. It was a little sexy but mostly sassy. It was a rejection of stuffiness. It was the antithesis of gruff, white-haired men in dark suits. And if anyone thought it was inappropriate or silly, well, the only response to that sentiment is that Sinema won the election and her constituents surely knew exactly what they would be getting — which is not their grandma’s senator. 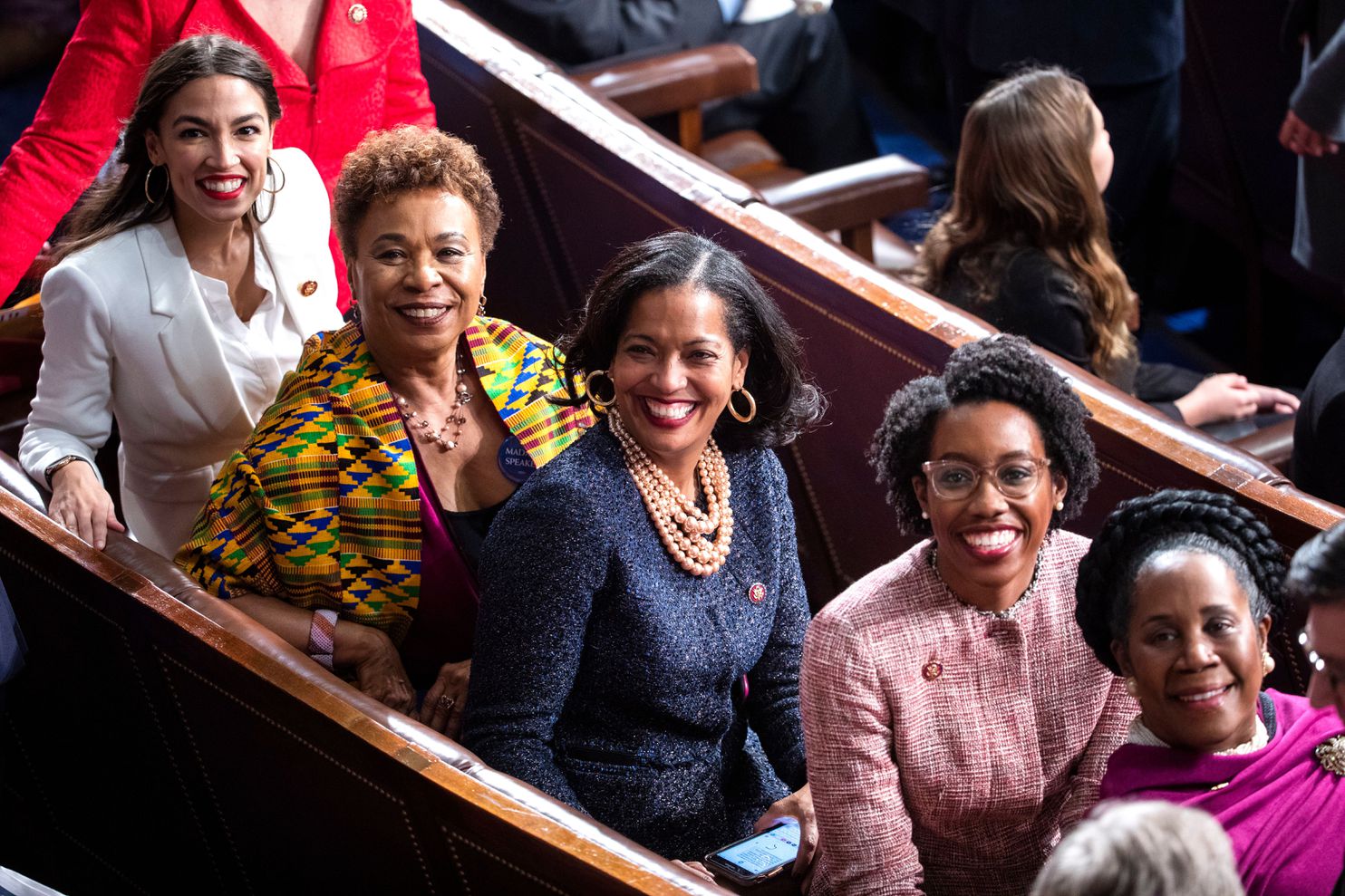 From left, Democratic Reps. Alexandria Ocasio-Cortez, Barbara Lee, Jahana Hayes, Lauren Underwood and Sheila Jackson Lee wait for Pelosi to accept the gavel as speaker. (Jim Lo Scalzo/EPA-EFE/Shutterstock)Ilhan Omar (D-Minn.), who came to the United States as a refu­gee from Somalia, wore a hijab at a time when both Muslims and refugees have been vilified. She also wore white, as did Madeleine Dean (D-Pa.) and Alexandria Ocasio-Cortez (D-N.Y.). Their attire stood out as symbolic of a new beginning, as well as a nod to the women’s suffrage movement. As Pelosi noted in her speech, this year marks the 100th anniversary of women having the right to vote. Their color choice underscored the occasion and asked: What are we doing with our vote? 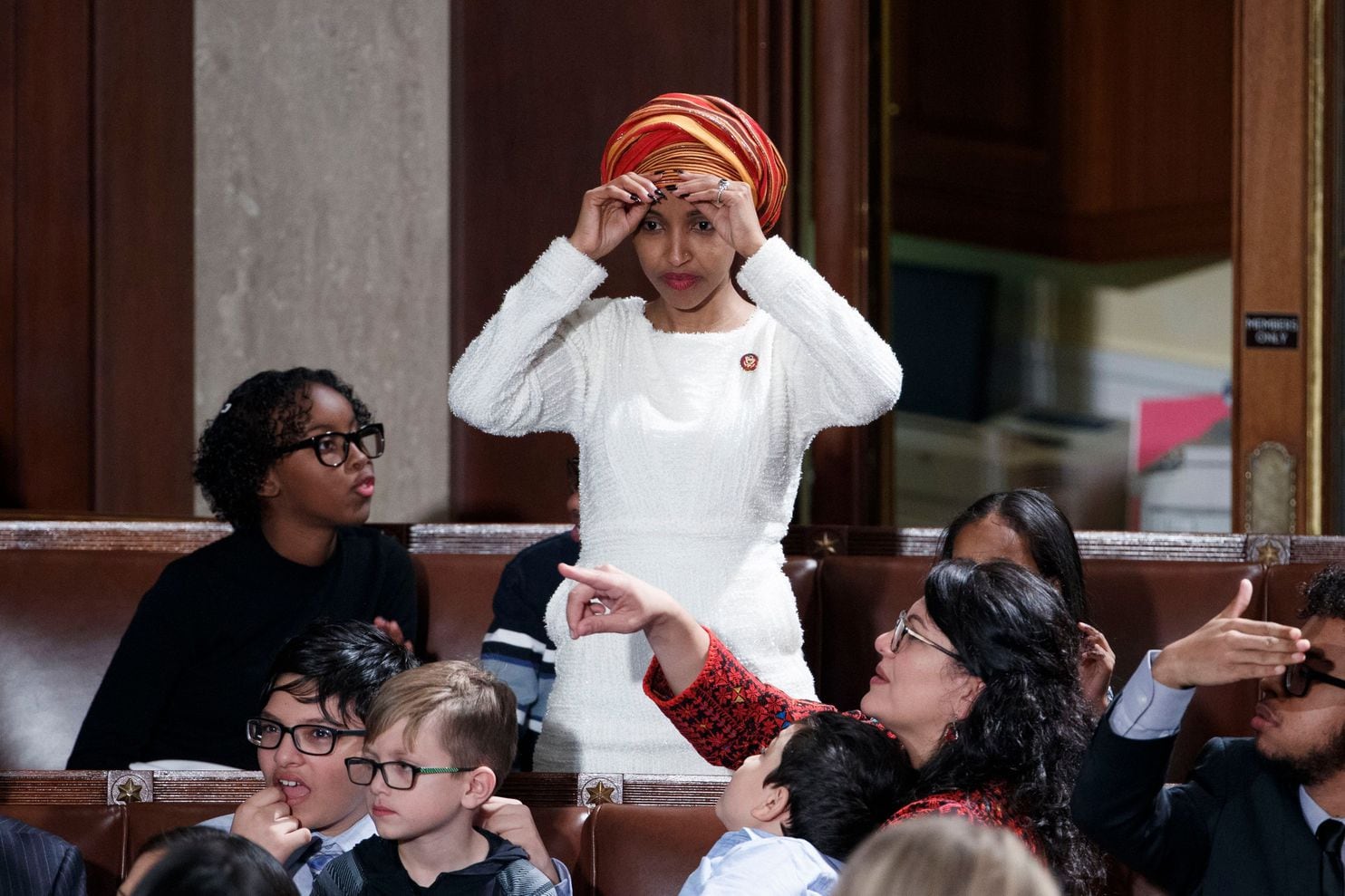 Rep. Ilhan Omar (D-Minn.) wears a hijab and white — the color of the women’s suffrage movement — during the opening session of the 116th Congress. (Shawn Thew/EPA-EFE/Shutterstock) 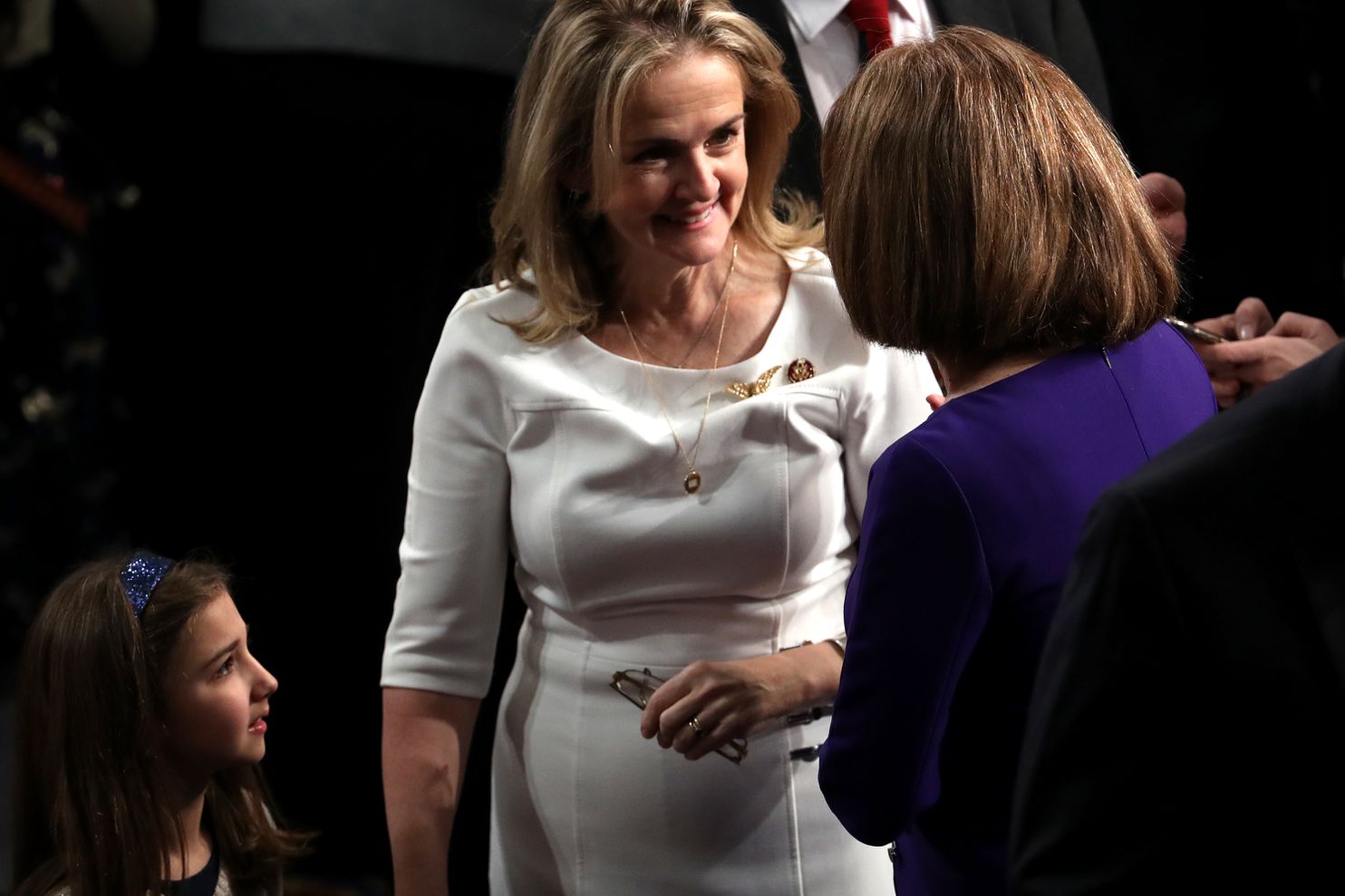 Fashion communicated a visual story about the day’s place in the country’s ongoing narrative and the ways in which these newly sworn-in congresswomen define their roles and themselves. Their choices placed them within particular communities; the setting — Capitol Hill — connected those varied communities in a singular national dialogue. The fashion was personal and political. Individual as well as universal.

The breadth of it spoke of the idealistic notion of freedom — of the right to simply be. Fashion in this context was not about looking au courant or attractive by some arbitrary standard. Fashion was a statement of intent. What do these women plan to do? Blow off the dust; listen to as many voices as possible; be bold.

Their opening gambit was made plain and eloquent in their clothes. The full story will be in their votes.